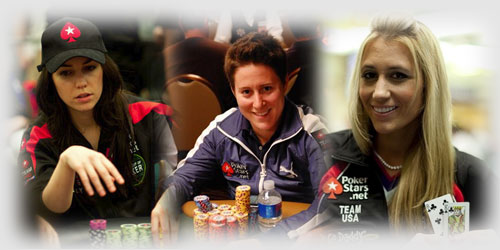 Poker is an equal opportunities game and while there may be more men at the felt than women, there?s certainly nothing stopping some women from profiting in the game. Indeed, some of the most talented players in the world are women which demonstrates that, unlike most sports, poker isn?t divided by gender.

Players such as Liv Boeree, Vanessa Selbst and Vanessa Rousso have not only proven themselves by winning million of dollars in the careers but by being students of the game; there is not one small detail they will not know about strategies and Texas holdem rules. All three are university graduates and have applied themselves to learning the art and skill of poker.

Above and beyond their capacity for playing cards, the trio have become ambassadors for the game and inspired women across the globe to learn poker.

While many women will feel intimidated at the felt by their male counterparts, the opposite is in fact true. Many male players now respect the women they face because they understand that it?s much tougher for a woman to break into the big time. Therefore, on that basis, they are much more likely to be strong player and someone to avoid playing against.

It?s true that women are a minority in the poker industry but that doesn?t mean they are the weaker sex. Indeed, some of the best players into the world are female and with more and more rising to the top it won?t be long before parity reigns in the world of bluffs, bets and bad beats.